The Bread of Canton Basel is one of the most famous breads in Switzerland and sold in nearly all Cantons across the country. It was already mentioned 1792 in Eugen A. Meiers Book "Das süsse Basel" (sweet basel) but unfortunately without any description of how it looks like. In 1944 it was first mentioned as Bread of Canton Basel in the book "Der Schweizer Bäcker-Konditor".

The Basel Bread is characterized by an aromatic crumb, the high water content (TA 180) - in this recipe TA 167 -  and the very high baking temperature of about 330 degrees. The shape is oblong oval, and it should have irregular and large pores. Usually there is no final shape - the dough is just put togehter to a ball / oval and floured. Two pieces are put together directly into the oven or on a baking sheet. The two pieces represent the two Cantons close to each other - Basel (City) and Basel (Countryside). The high temperature in the beginning makes the hugh oven spring

The breads are not scored before baking. Ideally the Crust should not open. Only at the bottom it is allowed to have it opened. Therefore a nearly full final rise is needed. If you are too early then you will burst the crust (in this case, the final rise was nearly ideal).
When the bread cooled down, the crust crackled loudly and caused this nice tiny crack across the crust. The original recipe uses a special Preferment (see very last section below) and a sourdough starter. The preferment is very common in Switzerland. It is made with commercial yeast. As i am not using commercial yeast, i have replaced the yeast by a preferment made with wild yeast water (refer to own page for how-to-make). I could also only make 270 degree instead of 330 which is sometimes used for baking. Therefore a lot of steam is very important to ensure a hugh oven spring. In some recipes, a different flour (Halbweissmehl) then my preferred and most common "Ruchmehl" is used. Ruchmehl is equivalent to the US First Clear Flour with high Protein content up to 15 percent. It contains most parts of the shell and therefore a lot of minerals and vitamins. 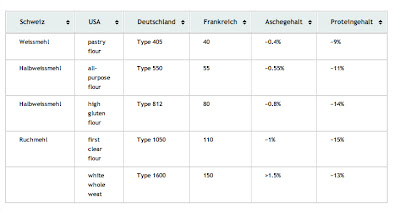 Dough
Stir together all ingredients except salt and let it rest for 30 minutes (autolyse). Kneed it for 10 minutes on lowest speed. Add salt and incorporate it for 2 - 3 minutes. The dough should detach from the bottom. Please do not add additional flour. Instead make one or two folds to give additional structure. Let it rest for 90 minutes at room temperature. Make a fold after 45 minutes. Cut into two pieces and very carefully pre-shape without deflating (form it to oblong oval).


Flour it and let it rest for 60 to 75 minutes at warm temperatures (28 to 30 degree) until nearly finally mature. Don't bake it too early, otherwise the crust will open which is not wanted for this bread. The bottom can open slightly - this is ok (at least my bread opened a bit at the bottom). Bake it at high temperature 270 or if possible at 330 degree with a lot of steam.


The preferment from the Original Recipe: Instead of the use of yeast-water-preferment, you can also use the recipe below with bakers yeast - just use this instead of sourdough and preferment
This recipe is forwarded to YeastSpotting 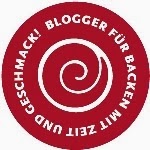